END_OF_DOCUMENT_TOKEN_TO_BE_REPLACED

From the Prolog of Ohrid:

Herod Antipas, son of the elder Herod, who was the slayer of the children of Bethlehem at the time of the birth of the Lord Jesus, was ruler of Galilee at the time when John the Baptist was preaching. This Herod was married to the daughter of Aretas, an Arabian prince. But Herod, an evil sprout of an evil root, put away his lawful wife and unlawfully took unto himself Herodias as his concubine, the wife of his brother Philip, who was still living. John the Baptist stood up against this lawlessness and strongly denounced Herod who then cast John into prison. At the time of a banquet in his court in Sebastia in Galilee Salome, the daughter of Herodias and Philip, danced before the guests. The drunken Herod was so taken by this dance that he promised Salome that he would give her whatever she asked of him, even though it be half of his kingdom. Being persuaded by her mother, Salome asked for the head of John the Baptist. Herod gave the order and John was beheaded in prison and his head brought to him on a platter. John’s disciples took the body of their teacher by night and honorably buried it and Herodias pierced the tongue of John with a needle in many places and buried the head in an unclean place. What later happened to John the Baptist’s head can be read on February 24. However, God’s punishment quickly befell this group of evil doers. Prince Aretas, in order to cleanse his daughter’s honor, attacked Herod with his army and defeated him. The defeated Herod was sentenced by the Roman Caesar, Caligula, to exile at first to Gaul and later to Spain. As exiles, Herod and Herodias lived in poverty and humiliation until the earth opened up and swallowed them. Salome died an evil death on the Sikaris (Sula) river. The death of St. John occurred before the Pascha [Passover] but its celebration on August 29 was established because, on that day, a church which had been built over his grave in Sebastia by Emperor Constantine and Empress Helena was consecrated. In this church the relics of John’s disciples, Eliseus and Audius, were also placed.

Troparion of St John the Baptist Tone 2
The memory of the just is celebrated with hymns of praise/ but the Lord’s testimony is enough for thee, O Forerunner,/ for thou wast shown to be more wonderful than the Prophets/ since thou wast granted to baptize in the running waters / Him Whom thou didst proclaim./ Then having endured great suffering for the Truth,/ Thou didst rejoice to bring, even to those in hell/ the good tidings that God Who had appeared in the flesh/ takes away the sin of the world/ and grants us the great mercy.

Kontakion of St John the Baptist Tone 5
The beheading of the glorious Forerunner/ was a divine dispensation/ that the coming of the Savior might be preached to those in hell./ Lament then, Herodias,/ that thou didst demand a murder/ despising the law of God and eternal life.
END_OF_DOCUMENT_TOKEN_TO_BE_REPLACED 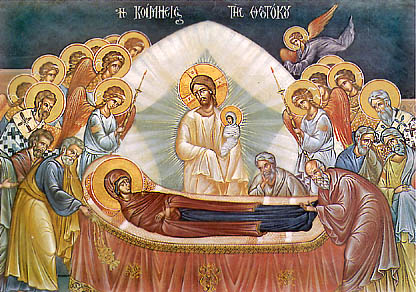 Troparion Tone 1
In giving birth thou didst preserve thy virginity;/ in falling asleep thou didst not forsake the world, O Theotokos./ Thou wast translated to life, O Mother of Life,/ and by your prayers you deliver our souls from death.

Kontakion Tone 2
Neither the tomb nor death could hold the Theotokos,/ who is sleepless in her intercessions and an unchanging hope in her mediations./ For as the Mother of Life she was transferred to life/ by Him Who dwelt in her ever-virgin womb.

END_OF_DOCUMENT_TOKEN_TO_BE_REPLACED

As I’ve related before: An answer to the prayers of the Theotokos for us. On retreat 11-13 October 2002, at a Benedictine monastery, I prayed the Akathist Hymn and asked for Mary’s intercessions for us. Seven weeks later we found out we were pregnant. Then, to put her seal on the matter, Sofie was born the evening before (liturgically, the feast of) Our Lady’s Dormition.

Our Lady has watched over us all this time, including saving Anna’s life when she had her miscarriage. I cannot look at our daugther, Sofie, and not be aware of the Theotokos’ watchcare over us.

Troparion of St Maximos Tone 3
By an outpouring of the Holy Spirit/ thou didst pour forth Christ’s sacred teachings./ Thou didst expound with divine authority the self-emptying of God the Word/ and wast radiant in thy confession of the True Faith./ Glorious Father Maximos, pray to Christ our God to grant us His great mercy.

Kontakion of St Maximos Tone 2
O Maximos divinely inspired champion of the Church,/ sure and illumined exponent of Orthodoxy,/ thou harp and trumpet of godliness,/ divine and holy adornment of monks:/ cease not to intercede for us all.
END_OF_DOCUMENT_TOKEN_TO_BE_REPLACED

And after six days Jesus taketh Peter, James, and John his brother, and bringeth them up into an high mountain apart, And was transfigured before them: and his face did shine as the sun, and his raiment was white as the light. And, behold, there appeared unto them Moses and Elias talking with him. Then answered Peter, and said unto Jesus, Lord, it is good for us to be here: if thou wilt, let us make here three tabernacles; one for thee, and one for Moses, and one for Elias. While he yet spake, behold, a bright cloud overshadowed them: and behold a voice out of the cloud, which said, This is my beloved Son, in whom I am well pleased; hear ye him. And when the disciples heard it, they fell on their face, and were sore afraid. And Jesus came and touched them, and said, Arise, and be not afraid. And when they had lifted up their eyes, they saw no man, save Jesus only. And as they came down from the mountain, Jesus charged them, saying, Tell the vision to no man, until the Son of man be risen again from the dead.

Troparion Tone 7
Thou wast transfigured on the mount, O Christ God,/ revealing Thy glory to Thy disciples as far as they could bear it./ Let Thine everlasting light shine upon us sinners/ through the prayers of the Theotokos, O Giver of Light, glory to Thee.

Kontakion Tone 7
Thou wast transfigured on the mountain, O Christ our God,/ and Thy disciples beheld Thy glory as far as they were capable,/ that when they should see Thee crucified,/ they might know that Thy suffering was voluntary/ and might proclaim to the world/ that Thou art indeed the reflection of the Father.
END_OF_DOCUMENT_TOKEN_TO_BE_REPLACED

Sayings of the Fathers

Fr. Seraphim (Rose) of Platina
"We are told by the Holy Fathers that we are supposed to see in everything something for our salvation. If you can do this, you can be saved."
Father Seraphim Rose: His Life and Works

St. Herman of Alaska
"The true Christian is a warrior making his way through the regiments of the invisible enemy to his heavenly homeland."

Fr. Seraphim (Rose) of Platina
"Anyone who is attracted merely by glittering censors, incense and beautiful vestments, he, first of all, will fall down before Antichrist."
"Signs of the End Times"

Fr. Seraphim (Rose) of Platina
"When I became Christian I voluntarily crucified my mind, and all the crosses that I bear have only been a source of joy for me. I have lost nothing, and gained everything."
Father Seraphim Rose: His Life and Works

Fr. Seraphim (Rose) of Platina
"Do not trust your mind too much; thinking must be refined by suffering, or it will not stand the test of these cruel times."
Letters from Father Seraphim

St. Theophan the Recluse
Here is a rule for reading:
Before reading you should empty your soul of everything.
Arouse the desire to know about what is being read.
Turn prayerfully to God.
Follow what you are reading with attention and place everything in your open heart.
If something did not reach the heart, stay with it until it reaches.
You should of course read quite slowly.
Stop reading when the soul no longer wants to nourish itself with reading. That means it is full. If the soul finds one passage utterly stunning, stop there and read no more.
The best time for reading the Word of God is in the morning. Lives of saints after the mid-day meal, and Holy Fathers before going to sleep. Thus you can take up a little bit each day.
The Path to Salvation