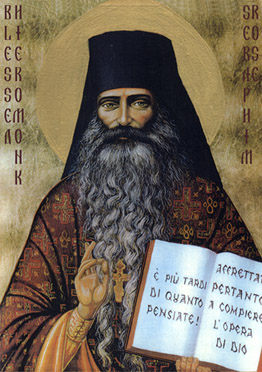 Troparian Tone 4
As a faithful ascetic of Saint Herman / thou didst flower as a spiritual rose in Platina / As an illuminator of Orthodoxy in America / thy writings bring hope throughout the world / Having taught us the True Faith / O Blessed Seraphim / pray to God for us.

Kontakion Tone 4
Being one supremely devoted to the Mother of God / thou didst take up thine abode on a mountainside near Platina / and there thou didst crucify thy flesh, with its lusts and passions, through ascetic struggle / wherefore thou art become the first born American saint, / an inspiration and guiding star to American Orthodoxy. / Wherefore we cry unto thee, / save us by thy prayers, / O Seraphim our Holy Father.

A Prayer to Father Seraphim:
Oh, Our Holy Father Blessed Seraphim, thou didst live thy life in accordance with the commandment of Christ to die to thyself, pick up thy cross and follow Him. Having done so, thou didst produce much fruit for God’s harvest. Pray to the Lord for us, thy spiritual children, who live in an age of unbelief and hostility to absolute truth. Pray that Christ our God strengthen us and give us the wisdom and faith to survive the ordeals ahead. Pray for our family and friends, both living and dead. Pray that the inner eyes of our souls be opened to see the divine and true Gospel of our Lord, God and Savior Jesus Christ, that we might acquire the Holy Spirit within ourselves. Pray that we all might someday dwell in bliss with thee and the other Saints in the Kingdom of Heaven. Pray to the Mother of God to entreat her Son to have mercy on our souls. For glorious and unending is the Kingdom of the Father and of the Son and of the Holy Spirit, both now and ever and unto the ages of ages. Amen.

On the morning that followed the Transfiguration Vigil, Fr. Seraphim served what was to be his last Liturgy on earth. Soon afterwards he fell ill and could not come to the monastery services. It was not unusual for him to be sick, and when he was he never complained, so that it was difficult to know just how bad his condition was. This particular illness caused him acute stomach pains. He remained in his secluded cabin, keeping his pain to himself. The heat, which had abated during the summer pilgrimage, now grew stifling and increased his discomfort. The aforementioned John from the Santa Cruz fellowship, now a catechumen, went to ask him some questions about the Holy Scriptures. “I found him to be in so much pain that he could not think clearly,” John recalls. “As usual, he listened patiently to my questions. He tried his best to be cheerful and not show his suffering, but finally he had to say that he just couldn’t answer right then.” (1014)

When Fr. Seraphim was examined at the hospital, the doctors found his condition to be quite serious. His blood had somehow clotted on the way to his intestines, and part of the intestines had already died and become gangrenous. . . .

Fr. Seraphim was immediately taken to an operating room, where the dead part of his intestines was removed. . . . (1015)

Having finished the first operation, the doctors thought that Fr. Seraphim would survive. Further tests, however, showed that the problem was not over: the blood had begun to clot again. The doctors immediately operated a second time, removing even more intestines, but they were coming across a great dilemma: if they used anticoagulants to prevent the blood from clotting, he would bleed to death internally, but if they did not use such drugs more and more tissue would die. A specialist in this rare disease was called in from San Francisco, but even he was at a lost to stop the damage. At this point doctors could give Fr. Seraphim only a two percent chance of recovery. (1016)

During Fr. Seraphim’s week-long agony, it was manifest to Fr. Herman and others that he had indeed been purified, conquering his will and offering it as a burnt sacrifice to God. There was not a trace of anger or rebellion in him now, only devotion, love, contrition and repentance. Once before administering Holy Communion to him, Fr. Herman read the Gospel and then, holding the book over the dying man, began to bless him with it. Suddenly Fr. Seraphim, exerting every last bit of strength in his dying, convulsing frame, raised himself up to kiss that sublime Book that has given him life. . . . (1020)

At about 10:30 on Thursday morning the doctors announced that there was nothing more they could do. Fr. Seraphim, weakned beyond recovery during a week of suffering, had begun to have multiple organ failures. Within minutes the watch over the dying had ended, and a new life had begun for him. . . . (1022)

Fr. Seraphim’s body was placed in the middle of the monastery church, in a simple wooden coffin that had been built by Fr. Vladimir Anderson’s son, Basil. There it was to remain until the burial. The Psalter began to be read around the clock in the church. The vigil had now become a vigil of prayer for the repose of Fr. Seraphim’s soul. (1023)

In the three days between his death and his burial, Fr. Seraphim’s unembalmed body never stiffened, nor did decay of any kind set in, even in the summer heat. There was no deathly pallor about him whatsoever; in fact, his coloring was literally golden. The skin remained soft and the body seemed to be, in the words of one monastery pilgrim, “one of a sleeping child.” . . . Since incorruption has from ancient times been viewed as a sign of sanctity in the Orthodox Church, all those present felt that they were witness to a manifestation of God’s grace. (1025)

Another account of his repose can be found here.

Accounts of miracles attributed to Blesssed Seraphim’s intercessions can be found here.

An akathist to Father Seraphim can be found here. (I have been working on a revision of this over the past few years, for my personal use.)

Transcribed talks of Father Seraphim online
Signs of the End Times (This talk is part of Father Seraphim’s lectures on CD)
The Search for Orthodoxy
In Step With Sts. Patrick and Gregory of Tours
Raising the Mind, Warming the Heart
The Orthodox World-View
The Royal Path: True Orthodoxy in an Age of Apostasy
The Holy Fathers of Orthodox Spirituality: The Inspiration and Sure Guide to True Christianity Today Part I, Part II, Part III

View all posts by Benedict Seraphim

One thought on “Blessed Hieromonk Seraphim (Rose) of Platina”

Sayings of the Fathers

Fr. Seraphim (Rose) of Platina
"We are told by the Holy Fathers that we are supposed to see in everything something for our salvation. If you can do this, you can be saved."
Father Seraphim Rose: His Life and Works

St. Herman of Alaska
"The true Christian is a warrior making his way through the regiments of the invisible enemy to his heavenly homeland."

Fr. Seraphim (Rose) of Platina
"Anyone who is attracted merely by glittering censors, incense and beautiful vestments, he, first of all, will fall down before Antichrist."
"Signs of the End Times"

Fr. Seraphim (Rose) of Platina
"When I became Christian I voluntarily crucified my mind, and all the crosses that I bear have only been a source of joy for me. I have lost nothing, and gained everything."
Father Seraphim Rose: His Life and Works

Fr. Seraphim (Rose) of Platina
"Do not trust your mind too much; thinking must be refined by suffering, or it will not stand the test of these cruel times."
Letters from Father Seraphim

St. Theophan the Recluse
Here is a rule for reading:
Before reading you should empty your soul of everything.
Arouse the desire to know about what is being read.
Turn prayerfully to God.
Follow what you are reading with attention and place everything in your open heart.
If something did not reach the heart, stay with it until it reaches.
You should of course read quite slowly.
Stop reading when the soul no longer wants to nourish itself with reading. That means it is full. If the soul finds one passage utterly stunning, stop there and read no more.
The best time for reading the Word of God is in the morning. Lives of saints after the mid-day meal, and Holy Fathers before going to sleep. Thus you can take up a little bit each day.
The Path to Salvation